The sixth most popular post on this website is a small item called “Coconut Rattles in Florida and Oklahoma.” I have no idea why this should be true (it is probably some accidental search engine optimization), but to satisfy hearty reader demand for more coconut rattle coverage, Jim Rementer shares here a bit of what he has learned over the years about coconut rattles among the Delaware people in Northeastern Oklahoma (Delaware Tribe of Indians) in the following guest post. Thanks to Jim for this post. –Jason

The Delaware Indians in Oklahoma made dance rattles from various materials. The main thing used in hand rattles was gourds, but at some time they found a new material to make rattles and that was coconut shells. These rattles were (and can be) used in dances like the Bean Dance (Malaxkwsitkan) and also by the men singers who accompanied the main singer who was using a water drum.

I have no idea when the Delawares started using coconut rattles nor how they cleaned them. I never thought to ask how they were made but this first one has a long bolt through the coconut and handle with a nut at the base of the handle (Figure 1). The one was made by James Thompson (1867-1964). 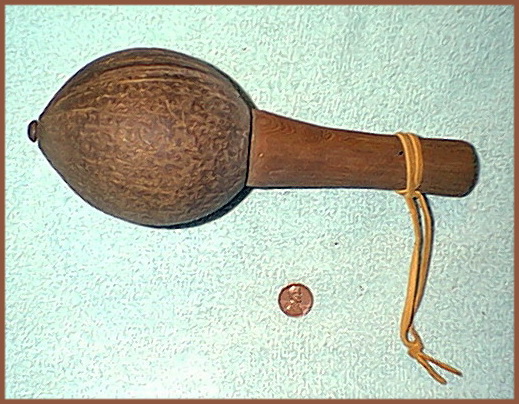 This other rattle pictured here was also made by a Delaware named William Wilson (Figure 2).

Figure 2. A coconut rattle made by William Wilson (Delaware).

Here (Figure 3) is a photo of singers at a Delaware dance held about 1960 at the same place where the annual Delaware Days are still held. Ranny Carpenter appears to be using a coconut rattle but I cannot be sure if it is a coconut or gourd.”

Figure 3. A water drum and coconut shell rattle being used at a Delaware social dance, ca. 1960. The Delaware word for any kind of rattle is shuhënikan.

From: Uncategorized
← A Cooperative Craft Survey in Dali Bai Autonomous Prefecture, Part 1
“At Home and Abroad: Reflections on Collaborative Museum Ethnography at the Mathers Museum of World Cultures” →
No comments yet