Posts from the ‘Ethnobotany’ Category

Social media is changing again and it seems like a good time to give Shreds and Patches more love and attention.

My collaborator and special issue co-editor Michael Paul Jordan and I are very pleased to announce the publication of a new double-issue of Museum Anthropology Review titled Studies in Museum Ethnography in Honor of Daniel C. Swan

Find the new collection in honor of Dan in Museum Anthropology Review online here: https://scholarworks.iu.edu/journals/index.php/mar/issue/view/2153 Thanks to all of the authors, production staff, publishers, peer-reviewers, and helpers who made this collection possible.

Fieldwork: Highlights from the Textile Group

This post in the recent series on December 2017 research and travel in Guangxi, China was written by Carrie Hertz, who also provided the photographs. 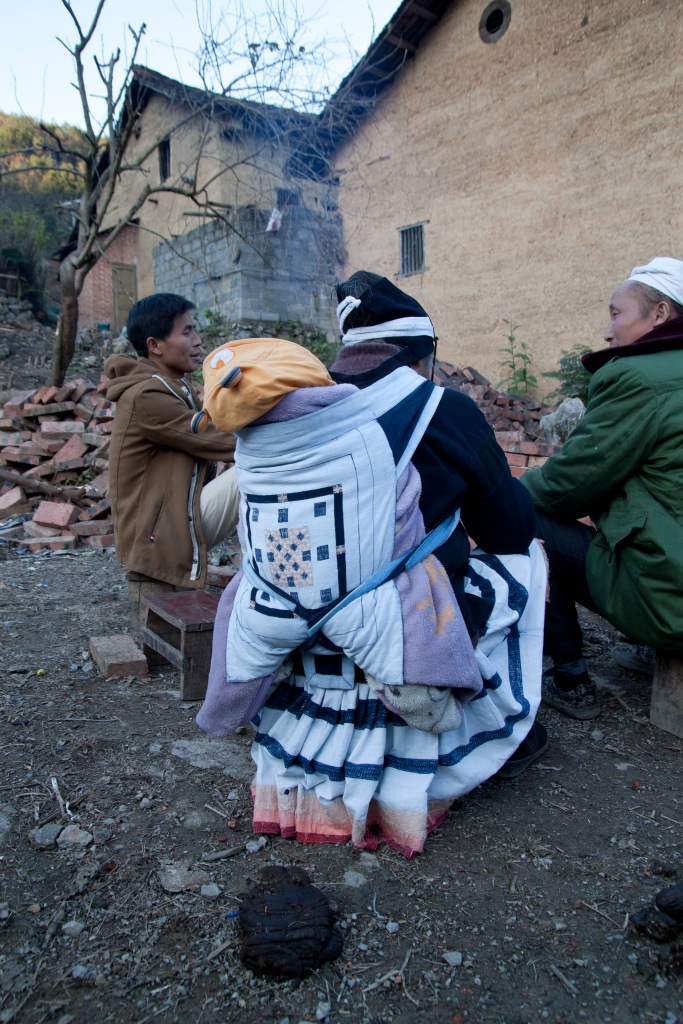 The textiles most visible in daily life are traditional baby carriers and women’s dress. December 15, 2017.

Textile making traditions are extraordinarily strong in Huaili village. In most households you can find a floor loom, an indigo dye pot, and a cache of tiny silkworm eggs. Because of the damp climate, most families hang their laundry out to dry. Strung out like banners across rooftops, balconies, pathways, and side yards, the clotheslines offer a visual inventory of typical wardrobes.

A clothesline of skirts in Huaili village. December 15, 2017.

Daily dress combines traditionally made and mass-produced garments. Most women have several sets of indigo-dyed skirts, aprons, jackets, and tunics in regular rotation, the finest serving as festival dress when new, and as daily wear when faded. With age, the natural red dyes of embroidered skirt hems bleed, creating a beautiful ombre effect, and the appliqued silk felt disintegrates, taking on a feathery appearance.

Each garment represents countless hours of skilled labor, spread out throughout the year. Winter, while fields lie untended, is a busy time for textile production. Throughout the village, small groups of women huddle around fires on their front stoops, busy with embroidery or winding spools of cotton.

Winter is also a good time for warping looms. Women help each other, taking over the village courtyard. It takes the better part of a day to set up warp poles and wind the approximately 80 meters of thread in a spiral pattern around them. 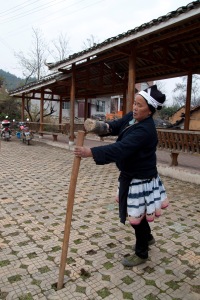 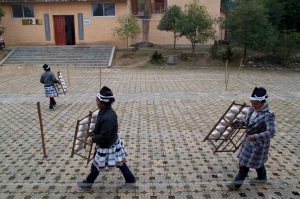 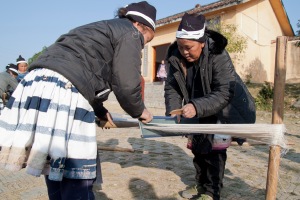 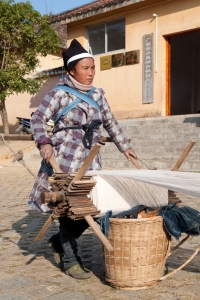 The tree sap used to draw intricate resist patterns on clothing is harvested in winter. The bark is scarred and glistening where people have gouged it with their knife blades. 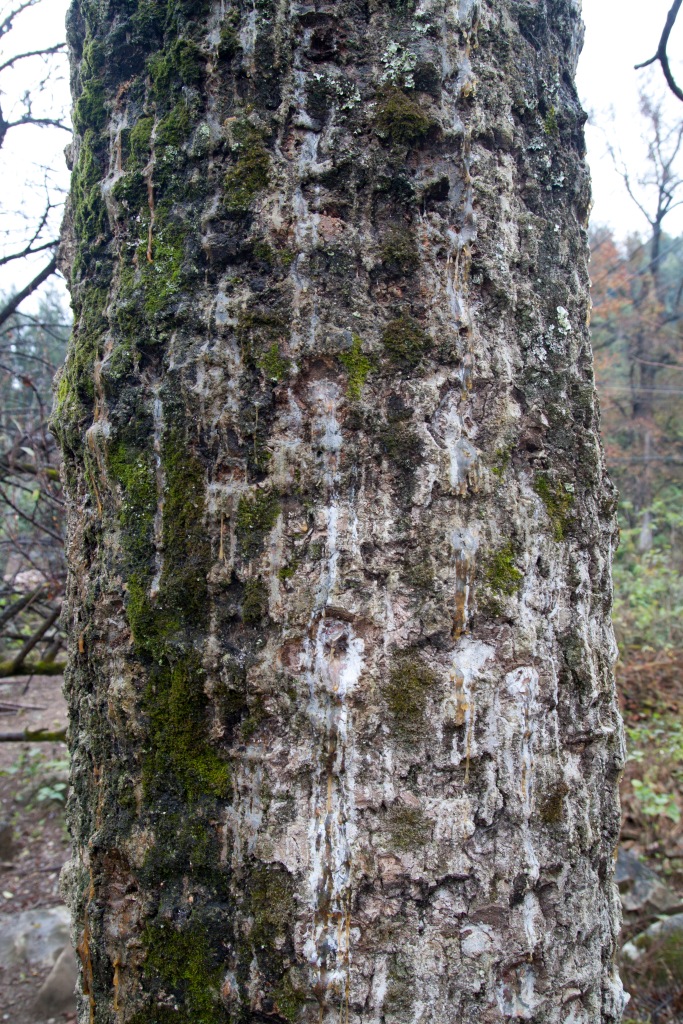 We had the great fortune to spend two days with a recognized master textile artist, He Jinxiu. She is considered the most skilled and knowledgeable needleworker in Huaili village and teaches embroidery and resist dyeing to all of the girls attending the local primary school. At her home, she brought out stacks of textiles that she was currently working on as part of a yearly cycle of production. Together we inventoried these materials, along with the tools, techniques, and terminology important to their creation. We diagrammed garment patterns. We filled notebooks with the local names for various motifs and their significance.

Liang Xiaoyan films He Jinxiu drawing resist patterns in sap on a cloth she will later indigo-dye and sew into a skirt. December 14, 2017.

He Jinxiu holds up a length of cloth partially painted with sap for resist dyeing. The cloth will eventually become a skirt. December 15, 2017. 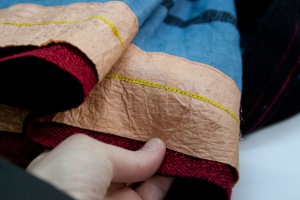 Detail of a newly-made skirt. The hem is embroidered in red silk and appliqued with a wide band of silk felt. December 15, 2017.

He Jinxiu shows off some of her finest textiles to the textile team. December 15, 2017.

This beautiful tunic is made with three layers, each elaborately embroidered and resist-dyed, though only the top layer can be seen. It is only worn for spring festivals and funerals. December 15, 2017. 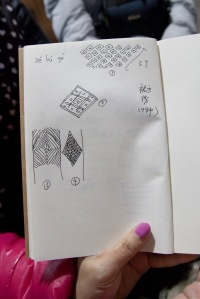 The home production of textiles is supplemented with supplies and finished goods purchased in the Lihu Town market. Alongside the many stalls stuffed with factory clothes and accessories, vendors sell silk embroidery thread, stylus for batik, and bolts of undecorated, hand woven cloth. A large area is devoted to selling indigo. One half kilogram costs about 6 RMB. In addition to being an important venue for textile sellers and makers, market days are for dressing up, for looking and being seen.

Mass-produced clothing and accessories for sale at the Lihu Town market. December 16, 2017. 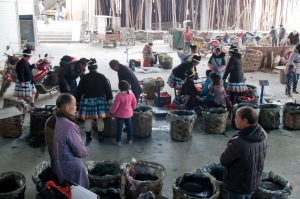 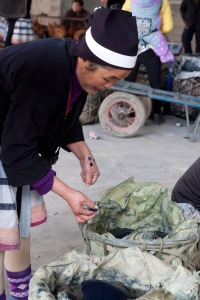 A woman tests the different dye pots by comparing the colors on her hand and tasting for bitterness. If the dye is bitter, it is too acidic and will not dye well. December 16, 2017.

Men dressed up for market day in rooster-tail coats and the white trousers for which the Baiku people are known. December 16, 2017.

We also had opportunity to interview Li Xiu Ying, the primary textile producer in her family. For most of her life, her mother made her clothes, but now she makes clothes for her mother, using the skills her mother imparted.

Li Xiu Ying wears a handmade needle case hanging from her belt. Her nail beds are ringed with blue from indigo dye. December 15, 2017.

With Mrs. Li, the textile team examined a traditional burial cloth, part of the ecomuseum’s permanent collection. Every household hopes to always have a few of these on hand. When villagers die, the cloth is laid over the body and a series of smaller cloths, thirteen layers for men and fourteen for women, cover the face.

A woman’s burial face cloth made by He Jinxiu is now in the collections of the Museum of International Folk Art. 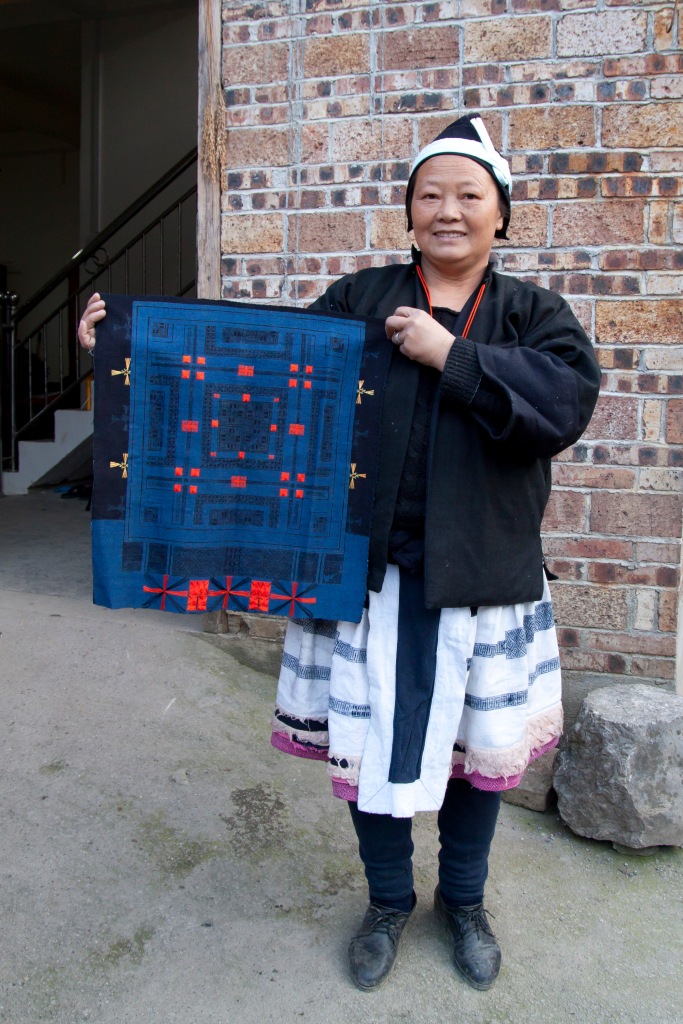 He Jinxiu holding up a woman’s burial face cloth that she made, now in the collections of the Museum of International Folk Art. December 17, 2017.

The textile research team feels incredibly grateful to those who shared their time and knowledge with us. These brief highlights merely touch upon what we learned and experienced during our visit.

Carrie Hertz is Curator of Textiles and Dress at the Museum of International Folk Art and a participant in the China-US Folklore and Intangible Cultural Heritage Project.

Coconut Rattles in Florida and Oklahoma

The diversity of materials used by Native peoples in the Americas to make hand rattles is pretty staggering. Among the farming peoples of the Southwest, Plains, Northeast and Southeast, gourds are one important material used for this purpose. Having the same basic form as gourd rattles, but unique to some Southeastern Indian peoples, are rattles, such as this Florida Seminole example, made from coconuts. William C. Sturtevant provided the coconut used here to Jack Motlow, from whom he commissioned it for $2.00 in 1951. This Florida Seminole example is made exactly like those used among the Southeastern peoples in Oklahoma, including among the Yuchi. (I commissioned Yuchi examples for the Gilcrease Museum in Tulsa during the later 1990s.) Such rattles are called “gourds” in English in Oklahoma and are particularly suited to the outdoor dances of the region. Such rattles are loud and thus sound great when used, as they most often are, outside, in open spaces. (The holes drilled in the coconut amplify the rattle’s sound.)

This example is #301 in the William C. Sturtevant Collection, Department of Anthropology, National Museum of Natural History, Smithsonian Institution.

(The Seminole Tribune has published biographical profiles of two of Jack and Lena Motlow’s daughters. These profiles are of Louise Motlow and Mary Motlow Sanchez and are online.)

Loans and Books: Two Brief Observations Made During the Student Debt Revolt

Many excellent graduate students with whom I have the honor of working receive only modest or no assistantship or fellowship aid. Historically, many have supported themselves in part during graduate school with government-backed student loans. This has always been a source of anxiety for me, but matters grew worse for U.S. students earlier this year when the major federal loan program changed its structure so that graduate students receiving such loans must begin paying them back immediately rather than after graduation. For students studying in the world in which I work, such a scenario is hardly possible. Even students with assistantships are just above the poverty line.

Meanwhile, more and more excellent scholarly resources ideal for the training of these students are being produced. But they are on the market at a price that no starving graduate student can afford and at which most professors would feel guilty assigning them. This reoccurring thought returned to me when I noted the publication of a very impressive looking ethnobiology textbook. It was also on my mind when I spoke last week to an editor of what promises to be the absolutely essential handbook for folklore studies. That volume will be rich beyond measure, but at 680 pages and 29 cents per page how will any of us afford to purchase it? If my library can afford it, I plan to sit and read it cover to cover in the stacks. Excellent scholars are producing excellent work, but the business model fails us, or at least our students.

A glimmer of hope came during the #AFS11 meetings. A group of folklorists have begun discussions aimed at creating an free and open access textbook for undergraduate folklore studies. One possible publication platform being discussed is connexions centered at Rice University. Hopefully folklore studies can become a leading field in the cultivation of Open Educational Resources. I cannot see how we can continue down the path that we are heading.

Open access folks in anthropology, folklore, and museums/archives who do not follow paleobotany should still check out the start of paleobot.org.

Daniel Swan on Osage Uses of the North American Lotus

Ethnobotany Research and Applications is an important gold open access journal in the field of ethnobotany. It is now in the midst of publishing its 8th volume. I am pleased to note that my friend and collaborator Daniel C. Swan has just published a paper in this journal. “The North American Lotus (Nelumbo lutea Willd Pers.) – Sacred Food of the Osage People” draws upon his long-term research with Osage people in present-day Oklahoma and grows out of his studies of both Osage cultural performance and expressive culture and his interest in plant use in Native North America. The paper also reflects Dan’s commitment to open access publishing. It has been a good month for him in this connection, as earlier this month another paper of his appeared in Museum Anthropology Review, this one on the decorated boxes made and used by members of the Native American Church.

Congratulations Dan!  Congratulations too to all those countless folks who would like to read such papers but who usually cannot afford to access them.